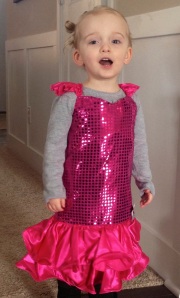 While I think I have the world’s greatest daughter, Harper isn’t anything like I dreamed she would be when she was born.

She seems to have zero interest in learning to play catch, the basketball hoop I insisted she get, wrestling with her Dad, or watching the Tigers on television.

She spends her time playing make believe, making me tons of coffee’s each day with “cweamuh” in the “wed” mug.  She sings her princess songs and insists on wearing a skirt of some sort, even if in footie pajamas.

She’s a girly girl.  From head to toe.  Through and through.

While Harper certainly has determined what every day looks like since she was born on Halloween in 2010, Kym and I have managed to sneak some intentional parenting in.

Thankfully, her mom and I both share a priority for routine at the end of the day.  It works for us.  It works for Harper.  And when it’s tripped up or completely missed out on, it’s a hot mess.

Part of that consistent nighttime plan involves the brushing of teeth, potty, a million excuses to avoid our bedroom, and two books read by Mom.  The two books are my second favorite part of the night.

Admittedly, I leave the room and leave the books to just the girls, but I get to listen on the monitor, and I always do.  Kym reads Sesame Street books from the earliest days and the characters and stories remind me of being a kid again.  Harper is so lucky to have such an animated and patient mother.

But the highlight of my day follows the books.  I hear the second bookend, and walk in to shut off the light.  Harper always fights the transition but quickly snuggles right in to my shoulder as her mom kisses her goodnight…

Somehow, despite Kym having a gorgeous voice (scholarship worthy and award winning in college!), I get to be the guy that sings in the rocking chair.

I never would have planned it this way.  But, I am SO glad that this job is mine.

It allows me to look forward to at least 10 minutes with my Harper Grace without any distractions.  Every day!

A subtle light fighting through the dark blinds always helps my little girl’s eyes seem to sparkle in the dark.  I can see her smile and her precious yawn.

I have license to introduce new songs, but I am required to sing the “Harper Song” which Kym wrote just after Harper was born.

We were up in the middle of night, wondering how we would survive this all…  Would we be good parents?  Were we doing it right?  We had no idea, but together we would console Harp as she cried or I would keep company as Kym fed her.  And then Kym just started singing.  The “Harper Song” just happened.  And it has every night since.

Other common requests include “The Rainbow Connection” and “Puff the Magic Dragon” both highly recommended for you parents out there.  They work as lullabies and also rekindle a childhood spirit you once possessed.

Lately the encore, the song you refuse to leave the concert early for… the one the audience has been chanting all night, has been “Awake My Soul.”  She asks for it first and in between each song I choose, but I save it for last.

She heard it at church one Sunday and the chorus (simply: “Awake my Soul”) stuck in her head.  It couldn’t be a better way to finish our time before I lay her in bed with her 4 dolls, 2 pillows, and 3 blankets she can’t live without.  Sure, the verses could be a distraction, but the chorus is a celebration.  It’s a revelation.

My daughter has changed my life.  Opened my eyes.  Made me feel things I never felt before.  And every night I sing to her.  Every night I realize that she was the key that unlocked a piece of me.  She has awakened my soul.  And every night I cherish that song with her.  I thank God for her.  I hold her tight.

And she always does.

Jim Davis is our newest contributing writer at Daddy Daughter Time.  He’s being featured weekly on “Music Mondays.”  After 20 years of trumpet playing and 7 years teaching middle and high school band, Jim now leads music at Keystone Community Church.  His posts aren’t always about specific songs or artists, but music has shaped who he is and he has long said that his daughter “makes his heart sing.”